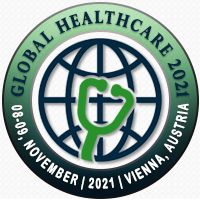 Theme: Exceeding the Vision of Healthcare

The primary vision of the conference is to improve the research and developmental activities in Medical Science and Health Science. Another vision is to promote scientific knowledge interchange between Academicians, Researchers, Doctors and Students working in and around the world. The conference are going to be held per annum to make it an ideal platform for people to share views and experiences in Medical Science and Health Science.
Welcome to the Official Website of the International Conference on Global Healthcare – ICGHC 2021. It will be held during 08th - 09th November, 2021 at Vienna, Austria. ICGHC 2021 is being organized by Scientex Conferences. The aim of the conference is to provide the platform for Students, Doctors, Researchers and Academicians to share the knowledge, concepts and ideas in the recent trends in the field of Life Science and Health Science.
Importance of the Global Healthcare
Global health is focussed on people across the entire planet instead of the concerns of particular nations. Global health recognises that health is decided by problems, issues and concerns that transcend national boundaries
Global health manifests itself in the diversity of culture, geography, demography, epidemiology, economics and gender. Successful global health interventions require a deep understanding, appreciation and concern for the social milieu of populations, their behaviors, customs and beliefs. When approaching global health, it is important to understand medical interventions alone do not solve public health problems.
Critical Global Health Concepts
• The determinants of health
• The measurement of health status
• The importance of culture to health
• The global burden of disease
• The key risk factors for different health conditions
• The demographic and epidemiologic transitions
• The organization and functions of health systems
A Few Examples of Global Health Issues
• Emerging and re-emerging infectious diseases
• Antimicrobial resistance
• Eradication of polio
• Diarrhea, measles and pneumonia in young children
• Sexually-transmitted infections in young women
• Tuberculosis
• Malaria
• HIV/AIDS
• Parasitic infections such as hookworm
• The increasing number of cases of non-communicable diseases such as diabetes and heart disease

Vienna is that the federal capital, largest city and one among nine states of Austria. Vienna is Austria’s primate city, with a population of about 1.9 million. It's the 7th-largest city by population within city limits within the European Union . Until the start of the 20th century, it had been the most important German-speaking city within the world, and before the splitting of the Austro-Hungarian Empire in war I, the town had 2 million inhabitants.

Drop us an email for Program enquiry
healthcare@scientexconferences.com